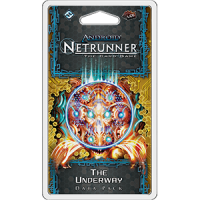 The Underway is the fourth Data Pack in the SanSan Cycle for Android: Netrunner, which explores the meat space, culture, and residents of the megacity SanSan. The cradle of high-end tech, home to beautiful beaches, and the host of the World Expo, SanSan is also still recovering from “The Big One,” the cataclysmic earthquake that opened up the San Andreas fault and redefined America’s western coast. However, this event that was disastrous for many was an opportunity for others, some of whom quickly moved their homes and businesses into the new space that was created.

Accordingly, the sixty new cards in The Underway (three copies each of twenty different cards) explore this new space and its motley assembly of different architectural styles, ethnicities, and cultural influences. They also explore the pervasive influence of Los Muertos, a street gang whose members are identified by their bioluminescent tattoos and who deal in illegal tech as much as they deal in flesh and drugs. Through the introduction of new resources, illicit hardware, and clever programs, the gang’s criminal influence pervades every aspect of this Data Pack, starting with a new Criminal Runner identity, then reaching outward as other Runner factions are supplied with the sort of tech you don’t normally find in America, and finally rippling into every aspect of every card as Corps are forced to deal with the gang’s members in one way or another.

Companies need to shift far from the animal drive despite they use to another orderly come up to that consider what can be the unimportant part of online network. write me an essay This must happen if partnerships are to wholly comprehend and after that fiscally use their action over the web-based social network condition

I've seen this game is it was

I've seen this game is it was awesome. I haven't played it though but its good.
how to buy facebook likes

Underway can be characterized

Underway can be characterized as whenever a vessel is in the water and not secured or on solid land. Online Essay Writing Service clearing a path implies that the watercraft is traveling through the water. The following is a case of the utilization of signs use in diminished perceivability that clarifies the distinction.

Very nice information.That personal and private doodled laden memoir some where along the line transitioned in to a very public blog. Now, millions of people at the drop of a Google search can learn everything from how to properly make a lasagna to predicting whether or not you will suffer from male patterned baldness. And people appear to be making a living at this.Now a days it is very exactly. I am very happy to see this type article. it is very useful and exciting. the best blessings of this article is giving properly idea to each and every readers and also it's giving correct impressions. Looking forward to new article. If you want essay related topic you can take online essay writing service help throughcustom essay writing service before the exam.

Nice blog. Found this while

Nice blog. Found this while searching through
google

You actually make it appear

You actually make it appear so easy with your presentation however I to find this matter to be actually something which I believe I would by no means understand. obat herbal kista tanpa operasi

It sort of feels too complicated and very wide for me. I am looking ahead in your next submit, I will try to get the hang of it! obat herbal diabetes melitus ampuh

I have been surfing online greater than 3 hours lately, but I by no means found any attention-grabbing article like yours. obat herbal penyakit lemah jantung

As the physical store for Games On Board is located in Australia the Australian Dollar (AUD) is used as a default. Paypal (when you go to checkout and use your account or credit card) will convert this into your local currency.

iShopping - This is a contributing Drupal Theme
Design by WeebPal.